American Can was the first company to developed a beer can for the Gottfried Krueger’s Brewing Company in 1933. With an initial pilot of 2,000 cans of 3.2 percent ABV beer, the company waited for consumer feedback (91 percent positive) and then went commercial in 1935 with its “Krueger’s Finest” along with its Cream Ale. But even before Krueger’s first sale, Pabst and Anheuser-Busch had tried canning experimentally in the 1920s, but then came Prohibition.

The benefits of cans

The benefits of the can were already obvious. Cans are lighter than glass bottles and less likely to break. Initially, they weren’t totally light, though. The flat-top cans that had to be opened with a churchkey weighed about four ounces each. They were originally made out of tin, then steel, then aluminum in 1958.

It didn’t take long for the development of the small New Jersey brewers to gain national attention. Pabst, out of Milwaukee, jumped on board and started producing their blue ribbon-winning beer in cans in 1935 as well.

After a lull in can production during World War II, canned beer came sweeping back into the mainstream. With more beer brands sticking to canning as opposed to bottling, the need for versatile packaging was less important and cone top cans started fading out. The next iteration of canning started in Pittsburgh, home of aluminum manufacturer Alcoa. Iron City Beer was the first to use the the easy-open can with a pull tab. Not one to sleep on beer trends, Schlitz adopted this style can as well, tweaking it a little with the first finger loop.

In 1969, the sales of canned beer surpassed those of bottled beers for the first time. Six years later, in 1975, the first fixed tab beer can as we know it now was developed. With the tab and piece of metal staying attached to the can, people and animals rejoiced as they stopped accidentally swallowing sharp pieces of aluminum.

The first fixed tab beer can was produced by Falls City Brewing Company and is used by just about every brewery and soda company to this day. While some hip breweries might use old can designs as part of their gimmick, the 43-year old design still seems to be going strong! 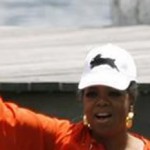 Oprah shakes her hangover with a Bloody Mary