The ice cream float dates back to the late 19th century when Robert Green operated a soda shop in Philadelphia and used carbonated water, syrup and cream to make his tasty treats. Legend has it, Green ran out of cream one day and instead used ice cream. Soon thereafter, his daily earnings soared from $6 to $600!

His own account, published in Soda Fountain magazine in 1910, states that while operating a soda fountain at the Franklin Institute’s semicentennial celebration, he wanted to create a new treat to attract customers away from another vendor who had a fancier, bigger soda fountain. After some experimenting, he decided to combine ice cream and soda water. During the celebration, he sold vanilla ice cream with soda water and a choice of 16 different flavoured syrups. The new treat was a sensation and soon other soda fountains began selling ice cream floats. Green’s will instructed that “Originator of the Ice Cream Soda” was to be engraved on his tombstone.

There are at least three other claimants for the invention of ice cream float: Fred Sanders, Philip Mohr, and George Guy, one of Robert Green’s own employees. The guy is said to have absent-mindedly mixed ice cream and soda in 1872, much to his customer’s delight.

In Australia and New Zealand, an ice cream float is known as a “spider” because once the carbonation hits the ice cream it forms a spiderweb-like reaction.

In the UK and Ireland, it is usually referred to as an “ice-cream float” or simply a “float”, as “coke” is often used generically to refer to any in the United Kingdom, and “soda” is usually taken to mean soda water, sweetened carbonated drinks instead of being collectively called “soft drinks” or “(fizzy) pop”.

In Mexico, it is known as “Helado flotante” or “flotante”. In El Salvador, Honduras, Guatemala, Costa Rica and Colombia it’s called Vaca Negra (Black Cow), while in Puerto Rico is referred to as a “black out”.

In the United States, an “ice cream soda” typically refers to a drink containing soda water, syrup, and ice cream, whereas a “float” is generally ice cream in a soft drink (usually root beer). 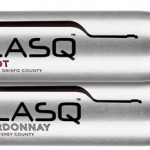 Flasq Wine – The first wine in a can