Makaela Gilchrist’s neighborhood has seen some tough times. A mix of privately owned homes and housing projects, it’s had its share of gang crime and senseless brutality. Stabbings have occurred just for walking on the wrong side of the street.

Gilchrist is blunt — she says it was a “bloody nightmare.”

“But I’ll tell you one thing,” she adds. “There’s been no violence in the garden.”

She’s referring to a verdant, 450-square-foot edible garden, plotted in the most unlikely of places — a municipal bus stop in the hood’s very heart. The Edible Bus Stop‘s credo is: “A brutal landscape brings a brutal outlook.” The garden aims to bring a little softness to a hard-edged place.

Urban community gardens are typically kept behind gates, out of easy public access. By contrast, both Edible Bus Stops (there’s another in West Norwood) are right there on the street, at the mercy of peeing dogs, vandals and trash. Yet somehow — likely due to each neighborhood’s sense of communal investment — these gardens remain largely safe and clean. 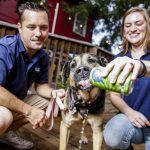