Yesterday we learned that Ja Rule spent his days in prison cooking up microwavable concoctions like lasagna and cheesecake. Since becoming something of a food nuking expert while behind bars, Ja Rule has now announced that he wants to write a cookbook featuring solely microwavable dishes.

Page Six reports that Ja Rule made an appearance on Geoffrey Zakarian’s SiriusXM show “Food Talk” during the New York City Wine & Food Festival. While on the mic, Ja Rule talked about how his stint in prison taught him how to make all sorts of foods (seemingly an entire cookbook’s worth) in the microwave. 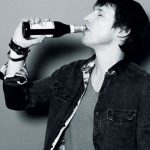 Singer James Blunt’s Biggest Fear Is Running Out Of Beer!