That’s a normal day’s yield at San Francisco’s time-honored Buena Vista Cafe. Batched along the bar in a neat line of 28 glass goblets, the cafe pours more Irish whiskey than anyone in the world thanks to its renowned recipe.

Invented by Irishman Joseph Sheridan in 1942, the original Irish Coffee was developed to soothe and revive the spirit. The recipe made its debut at the Buena Vista in 1952, when owner Jack Koeppler and international travel writer Stanton Delaplane set out to recreate the warming brew after Delaplane enjoyed a glass at Ireland’s Shannon Airport. Decades later, that same recipe graces the bar each day by the thousands.

Paul Nolan has been with Buena Vista for 37 years and estimates that he’s poured an astounding three or four million Irish Coffees. Jack McGarry of New York City’s The Dead Rabbit developed the bar’s historically-based drinks program (which boasts the largest Irish whiskey selection in New York) and has mastered his own Irish Coffee recipe. Who better to divulge the secrets behind this deceptively simple drink than these highly-trained experts? With their help, you’ll soon learn that a perfect Irish Coffee is very much the sum of its parts.

The goblet of choice at Buena Vista? A dainty 6-ounce, stemmed glass that’s shaped to show off a snowcap of whipped cream. The tulip shape prevents an over-sized pour of coffee and keeps the balance of ingredients intact. Equally important is what happens before any coffee even hits the bottom. Always pre-heat your glass by filling it with hot water and letting it sit until warm. This keeps the coveted cocktail steaming hot from the get-go. 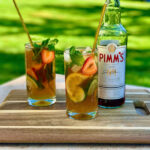 The History of Pimm’s