Three Ships Whisky has launched the World and South Africa’s first whisky finished in a cask previously used for the maturation of Pinotage – the uniquely South African wine cultivar cloned in 1925 by Abraham Izak Perold.

With only 3500 bottles of the 4000 bottles available for purchase by the public, the Three Ships 15 Year Old Pinotage Cask Finish is the oldest whisky to date launched in South African history and crafted by Master Distiller Andy Watts, who sought to capture the unique heritage of South Africa in creating this rich, complex and unique whisky.

“Whisky finishes are nothing new, but never before has a Pinotage cask ever been used. The idea first came to me in the early 2000s but back then our industry was still very young and the world wasn’t quite ready to accept such innovation from South Africa.

“But I had never let go of my dream so some years later I had laid grain and malt whisky to rest in American casks for the purpose of finishing the blend in Pinotage casks. That was 15 years ago. Seems like half a lifetime has passed since then! This moment of being able to stand with the finished product in my hand is, in 25 years as a master distiller, truly the pinnacle of my career. I’m literally on cloud nine!”

The grain and malt components of the whisky were first matured separately in American casks before being finish for different periods in eight casks previously used for Pinotage.

The wine casks imparted the typical Pinotage varietal character of red berry fruit and a slight earthiness to the whisky which softens the malt component and complements the sweetness of the grain. With a red berry tinge the whisky is light in style with prominent cherry, plum, tropical fruit and the typical Pinotage earthy notes on the nose. The palate is clean with hints of the banana and pineapple ending with a lingering warm finish.

The Three Ships 15 Year Old Pinotage Cask Finish is the second release in the Master’s Collection series which, over the next few years, will see a limited edition being launched each year under the Three Ships brand. 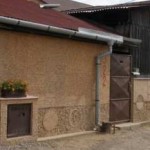 Welcome to the Cork house