Scientists at the Francis Crick Institute in London discovered that alcohol really does make you hungrier and having a drink before dinner really make some people eat more.

According to the study, alcohol switches the brain into starvation mode, increasing hunger and appetite. In tests on mice, alcohol activated the brain signals that tell the body to eat more food. The UK researchers believe the same is probably true in humans.

It would explain why many people say they eat more when they have had a few drinks.

The mice were given generous doses of alcohol for three days – a dose being equivalent to around 18 units or a bottle-and-a-half of wine for a person.

The alcohol caused increased activity in neurons called AGRP. These are the neurons that are fired when the body experiences starvation.

The mice ate more than normal too.

When the researchers repeated the experiment but blocked the neurons with a drug, the mice did not eat as much which, the researchers say, suggests that AGRP neurons are responsible for the alcohol-induced eating.

Alcohol itself contains lots of calories. A large glass of wine, for example, can contain as many as a doughnut.
The study authors, Denis Burdakov and colleagues, say understanding how alcohol changes the body and our behaviour could help with managing obesity. 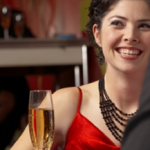 Are you being judged on your wine knowledge on a date?