Eighty percent of Americans get a daily jolt from caffeine, and now, as marijuana legalization has spread across the nation, some users and businesses have begun touting a combination of the two drugs.

Scientists in the country of Georgia are working to grow wine grapes on Mars.

Is there any truth behind the idea that the hoppy Irish beer known as Guinness helps women to breastfeed?

If the thought of sipping a beer is gag-inducing, you’re not alone. But even if you’re in good company, it begs the question: Why do some people hate the taste of beer?

A mathematician says this actually might be the best glass to use to serve Guinness.

If you’re a teetotaller, your friends have likely tried to convince you to taste red wine by swearing on its multiple health benefits. These benefits have been credited to a compound found in red wine: resveratrol. But claims for this compound have been a subject of major debate – while some argue that it can prevent cancer and promote heart health, others say there is no proof.

Resveratrol is a compound produced by certain plants in response to stress, injury, or fungal infection. Its natural function is to ensure the survival of the plant under these harsh conditions, and it has been used as an oriental medicine to treat diseases related to blood vessels and the liver. However, some studies have failed to observe the same “elixir” function. Because of the lack of enough human clinical data and a lack of understanding of how exactly resveratrol might work, the jury has remained out on whether this compound actually does lead to health benefits.

Now, Sajish Matthew and Paul Schimmel at the Scripps Research Institute have taken a key step in addressing this. In a study published in Nature, they explain the mechanism through which resveratrol does have anti-cancer, anti-diabetic and cardio-protective effects. And their findings open up avenues for its use in therapeutics.

Decanting wine is a common tactic among some oenophiles, and involves pouring the drink through an aerator or into a special container to let it “breathe.” 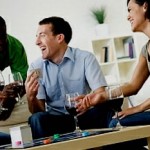