The battle being fought in laboratories and tasting rooms around the world is between beer drinkers and wine drinkers.

Each side claims that their drink is the best, arguing over everything from taste to overall “classiness” of their libation of choice. Given that beer and wine are the two most popular alcoholic drinks in the U.S., it’s safe to say that each drink has certain merits.

However, there is one area in which wine has a clear advantage, and that is when it comes to your health. While no one is suggesting that wine is a health food, or that someone who doesn’t drink at all should take up imbibing vino just for the health of it, when consumed in moderation, wine does offer some clear benefits for our health that beer doe not.

Wine is good for your heart

While a Danish study in 2000 indicated that all forms of alcohol can lower the risk of heart disease, thanks to its ability to increase HDL cholesterol and hence reduce the thickening and hardening of the arteries, red wine was shown to be the most effective in preventing heart disease. Researchers chalk this up to the fact that red wine (and white wine, to a much lesser extent) contains tannin procyanin. This antioxidant encourages cell growth while also preventing plaque build-up in the arteries and reduces the risk of stroke and other serious heart problems. In fact, this antioxidant is believed to the be the explanation for the so called “French paradox,” the fact that the French have lower rates of heart disease than people from other countries, despite diets that tend to be high in fat and cholesterol. 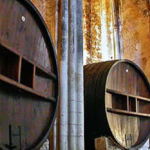 The Church kept wine-making alive during the Dark Ages