Every wonder why there is a plastic ball in your Guinness can?

Nitrogenisation is the key to making a beer that’s rich and creamy, with a smooth texture. Guinness pairs nitrogen gas and carbon dioxide when the beer is poured in pubs on draught,  to balance out the texture.

In order to replicate this effect for a Guinness served in a can, little white balls called widgets are used, to blast the stout with nitrogen gas.

In cans, widgets are spherical, while in bottles they’re shaped like rockets.

How does the Guinness ball work?

The Guinness ball is a hollow, spherical piece of plastic with a tiny hole in it and it looks a little like a mini ping pong ball.

Brewers add pressurized nitrogen to the beer during the canning process, which trickles into the widget’s hole – along with a little bit of beer.

This process makes the nitrogen inside the widget squirt into the beer, creating a burst of tiny nitrogen bubbles that rise to the top of the beer.

This creates the thick, creamy head like the one on a Guinness you’d be served in the pub. 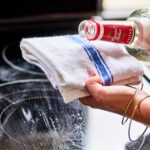 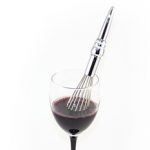