New Yorker Timothy Sullivan had an epiphany a decade ago when he tried his first sake. It’s led him to spend the last decade as an evangelist for the Japanese drink made from fermented rice, running his own website, UrbanSake.com and becoming a “Sake Samurai”.

Sullivan is now a brand ambassador for Niigata sake maker Hakkaisan and Business Insider caught up with him during a sake masterclass at the Noosa International Food and Wine Festival on the weekend, to ask about the rituals of serving sake and why the cups are so small.

Here’s his explanation for the next time you find yourself shouting “Kanpai!”

“There’s a mini-ritual in Japan – it’s considered very rude to pour sake for yourself – so Japanese, when they’re having dinner with someone in a group they’re always on the lookout for the empty cup and they will grab the bottle and fill any empty cup and that is done in reciprocation as well,” Sullivan said. 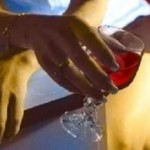 No wine for women