Frequent toasting and tiny snacks like pickles must accompany the shots, which are always served straight and ice-cold. Since the contained ethanol lowers the freezing point drastically, there’s no fear of the liquor solidifying.

Yet there’s more than precedent that influences drinkers to consume this nearly flavorless spirit cold. First, cooling vodka impacts its texture, creating a richer, less watery liquid many prefer for mouthfeel. But don’t get it too cold, as Francois Thibault, the creator of Grey Goose.

For higher quality vodkas, they should still be chilled, but only at fridge temperature to maximize aroma, he advises. So what makes the temperature of this high-proof spirit taken more into account than liquors served straight from the cabinet?

Chilled vodka has a better taste and texture

Largely, consumers chill vodka so that it’s easier to drink. Slinging down a cold shot goes down smoother due to a group of compounds known as volatiles. These structures readily vaporize, contributing to desirable flavors, like in whiskey, and that alcohol-on-the-nose sensation associated with low-quality liquors explains VinePair. Since vodka is distilled for a clean, smooth taste rather than complexity, limiting the flavor is desirable, especially with low-cost bottles. If trying to down as many glasses as possible, the colder, the better. 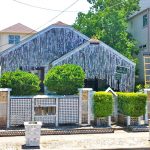