Described as the gateway to the Karoo, Montagu in the Western Cape is known for its sheer beauty and “community of smiles and sunshine”, according to a tourist brochure. Yet for many farm workers, such as Johanna de Koker, life on the farms in the scenic Koo valley outside the popular tourist town is far from idyllic.

“Farm workers start work at 7.30am and work until 6.30pm,” said De Koker, who joined in a protest march in the area this week. “We pick apples, pears and peaches. I earn R350 a week and I have three children to look after. I just can’t come out on that. I won’t stop striking until there is a new deal on the table. Not a damn will we stop until we earn more money.” 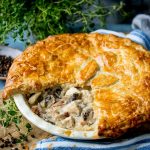 The History of National Pie Day