A new study shows that drinking two to seven glasses per week has mental health benefits.

Everyone who owns that cutesy, annoying sign that says, “Wine a Bit…You’ll Feel Better” has been validated. Not in terms of taste in design, mind you, but rather in regards to mental health. A new Spanish study has shown that moderate consumption of wine, a depressant, is associated with a lower risk of depression.

The seven-year study followed 5,505 men and women between the ages of 55 and 80 who were at high risk for depression. Participants were part of the larger PPREDIMED study: Prevention with Mediterranean Diet, which looks at the health benefits of things like eating lots of olive oil and drinking wine. While those who drank heavily were more prone to depression, the study found, “wine consumption in the range of two to seven drinks/week was significantly associated with lower rates of depression. 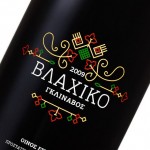