According to the CDC, we’re currently in the middle of one of the worst cold and flu seasons in recent memory. Chances are, you or someone you know has the bug right now, and since this year’s strain of the flu vaccine doesn’t seem to be helping all that much, you’re probably looking for relief anywhere you can get it. But instead of wasting your money wandering the aisles of your local pharmacy, trying every over the counter remedy you can get your hands on, head to your liquor store, grab a nice bottle of whiskey and make a hot toddy instead.

One of the main ways your body is able to fight off a cold is by getting enough sleep so that you’re well rested. While you could turn to Nyquil to try and help you with that job, a hot toddy works just as well, and a bit more naturally, at relieving your symptoms so you can rock off to sleep – plus you won’t have that hazy Nyquil hangover many people often say they develop in the morning.

For decades people have used the hot toddy as a natural remedy for easing all those aches and pains that are associated with the common cold, and for the most part, it was just assumed that it was one of those natural remedies, like chicken soup, that works because your brain thinks it works, not because there is actual science behind it. But as it turns out, a hot toddy is actually pretty great, from a scientific perspective, at soothing your cold. 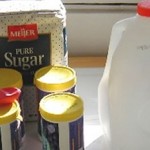 How to make your own wine using common household items