During his bus tour across the battleground state of Iowa, the president on Tuesday gave a bottle of the brew, known as White House Honey Ale, to a patron of a Knoxville, Iowa, coffee shop when the subject of beer came up.

While it was the first time the branded beer grabbed wide attention from the press corps on the campaign trail, a White House official said the president and first lady have made a habit of occasionally traveling with bottles of the beer made at a small brewery at the White House.

The beer, which comes in both a light and dark variety, is made by the White House chefs who use traditional beer-brewing methods.

The honey portion of the drink is taken from first lady Michelle Obama’s garden beehive near the White House Kitchen Garden on the south lawn.

Taxpayers are not footing the bill for the beer, as both the cost of the equipment and the cost of brewing the beer is paid for by the Obamas personally, the official said. 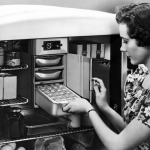