One of the greatest resurgences in the wine world’s recent history is that of Madeira. Long relegated to the lower shelves as an aide for cooking and cheerful sweet quaffing, the fortified wines from this island off the coast of Portugal have lately undergone a renaissance. The revival of Madeira wine has been spectacular as its unique structure, complexity and diverse flavour profiles beguiles wine-lovers and critics around the world.

And then, of course, there is the fact that no other wine has the ability to age like Madeira due to the process used in its making. This enables one to today drink a wine of over a century old without detecting the slightest hint of spoilage.

As a Portuguese company and a major supplier of cork stoppers to the Madeira wine industry, these wines hold a special place in the heart of Amorim, whose South Africa MD Joaquim Sá recently hosted a tasting for members of the Cape Wine Makers Guild (CWG). Amorim is a proud sponsor of the CWG’s protégé programme which creates opportunities for the country’s previously disadvantaged wine makers.

And when it comes to Madeira, most of the CWG members present at the tasting admitted to being disadvantaged in their knowledge of this legendary wine. 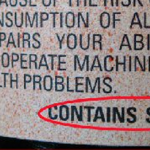 What are sulfites and what purpose do they serve for the wine?