Hospitals in Tehran, Iran’s capital, have been reporting a recent rise in alcohol-poisoning cases, as the public tries to deal with the coronavirus spread within the country.

Although spirits, wine and beer have been banned in Iran since the Iranian Revolution of 1979, many Iranians have been attempting to safeguard themselves from contracting the novel coronavirus by way of alcohol consumption, based on a circulating rumor.

Considering the ban on alcohol within the country, many Iranians resort to drinking smuggled spirits or home-distilled moonshine. Since these products are unregulated, they may contain methanol and higher than normal amounts of alcohol. This makes consumption of them possibly dangerous, and therefore it is unclear how much is safe to drink.

During commercial distillation, almost all of the methanol is removed before the spirits are bottled. But since there are no commercial distilleries in Iran, having a glass of home-distilled alcohol is like a crapshoot.

Health officials are claiming that in some cases, “methanol-rich alcohol” has led to the untimely death of many patients. Doctors are now warning the public that alcohol consumption has no bearing on whether or not the patient will contract the coronavirus, and to instead “follow common medical advice.”

Iran is one of the countries outside China most affected by the epidemic. As of Sunday, the country had reported 6,566 infections and 194 deaths – although suspicions are that the numbers are far higher. 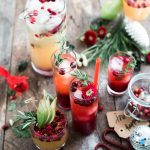 Learn How to Professionally Garnish Cocktails and Smoothies