The 54-year-old actor was accompanied to the set of the 1995 movie by a family friend who was always “very drunk” and he spent hours studying his behaviour and noting the “poetic” things he said in order to incorporate them into his performance as an alcoholic Hollywood writer in the movie.

He said in a video for GQ magazine: “My cousin, Roman Coppola, said, ‘You should go, hire Tony Dingman’ – who was at that time, very drunk and also a poet – ‘Hire him to be your drinking coach.’

“So I had him on the set with me all the time, the poor guy, curled up in a fetal position in my trailer while I played bongos, I was trying to get some rhythm for the character.

“But I would watch him and he’d say the most poetic things, like, ‘You do not kick the bar, you lean into the bar because it’s not ‘Vino Veritas, it’s In Vino Veritas’, he’d just spout all these things out and I put them in the movie.”

And Nicolas – who won an Oscar, a Golden Globe and a Screen Actors Guild award for his performance – admitted there were some scenes he shot while “completely hammered” because he wanted to be as “credible” as possible.

“Because I wanted to be out of control and have them photograph that so I could reach that credibility, that authenticity. 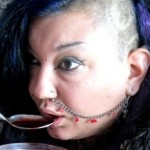