But at New York City’s famed Serendipity 3 restaurant, the sandwich is both record-setting and budget-busting at $214 a pop.

Formally named “The Quintessential Grilled Cheese Sandwich,” the dish officially holds the title of the most expensive sandwich in the world, according to CNBC.

Despite the steep price, chef Joe Calderone says he’s sold dozens of the speciality item. But it can’t be ordered on a whim; the grilled cheese must be ordered at least 48 hours in advance.

It starts with plush French bread that has Dom Perignon champagne and 23-karat gold baked throughout.

The sandwich is then stuffed with caciocavallo podolico, a rare cheese imported from southern Italy that tastes like a mix between manchego and parmesan. A mere 25,000 cows produce the specific milk found in the cheese, and they only lactate for two months per year.

After getting buttered up, the bread is brushed with a mixture of white truffle oil and gold flakes, which adds extra crisp.

It’s melted in a panini press for four minutes, giving the cheese time to start bubbling. Once removed, the sides are encrusted with sheets of edible 23-karat gold.

But what’s grilled cheese without tomato soup? To complete the iconic pairing, the sandwich is served alongside a luxe version of tomato bisque filled with chunks of South African crayfish. 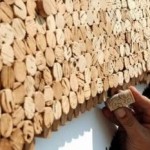