Tacos have become a favorite meal in the United States. In 2020, Americans ate over 4.5 billion tacos, which is equivalent to 490,000 miles of the food.

As the dish is now so widely available, its history has many suggested origins. However, according to Expert Jeffrey M. Pilcher, the word originates from the silver mines in Mexico in the 1700s when taco referred to small explosives workers used to extract the ore.

“The first references [to the taco] in any sort of archive or dictionary come from the end of the 19th century,” Pilcher said online. “And one of the first types of tacos described is called tacos de miners, or, miner’s tacos. So the taco is not necessarily this age-old cultural expression; it’s not a food that goes back to time immemorial.”

Additionally, anthropologists say there is evidence suggesting inhabitants of the Valley of Mexico lake region ate tacos filled with small fish in the 16th century. The fish were later replaced by small live insects and ants in the states of Morelos and Guerro, while locusts and snails were favorite fillings in Puebla and Oaxaca.

The hardshell taco was first noted in 1949 in a cookbook by Fabio Cabeza de Vaca Gilbert. This version of the taco is believed to have aided the dish’s expansion into North America in the mid-to-late- 20th century.

Moving forward in time, the widespread expansion to the United States is believed to be credited to chain restaurants such as Taco Bell, which was founded in California in 1962. The first taco truck in the United States was started around a similar time in New York in 1966, when two housewives operated the truck for catering.

There are now countless versions of tacos. The tortilla is made of usually corn or wheat and is wrapped or folded around a filling, traditionally made of spice proteins. Other varieties include meats or seafood, chicken, beans, cheese and eggs. 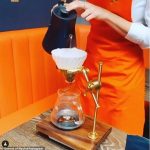