Whether you’re in Hong Kong or Shanghai, get ready to drink lots of tea. And when a server fills your cup, show your appreciation the way the locals do. Instead of saying thank you, quietly tap your fingers on the table during the pour.

Legend traces this etiquette back to a Chinese emperor who liked to travel the countryside incognito. When he refilled his companions’ cups, they would tap their fingers rather than bow before him, so as not to blow his cover. The practice endures both in Hong Kong and the mainland, but with variations. In Hong Kong, people tend to tap two fingers — the pointer and middle finger. In Shanghai, they usually add the ring finger in as well.

At one restaurant in Hong Kong, a waitress tells me I should be tapping only with my pointer. But the manager insists two fingers was right. “She’s from the country,” he says of the waitress, waving his hand theatrically. “She doesn’t know what she’s talking about.” 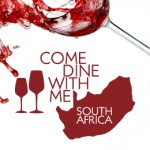 Come Dine with Me South Africa renewed for a second season