Angelina Jolie and Brad Pitt are a force to be reckoned with in Hollywood as one of the strongest power couples, and it looks like they are becoming major players in the wine industry also with their debut wine Château Miraval Côtes de Provence Rosé selling like “hotcakes”.

The engaged couple launched their own brand of rose earlier this year which became an instant his after selling out 6,000 bottles just five hours after going on sale.

President of Wally’s Wine and Spirit,s Christian Navarro, whose company snapped up Brad and Angelina’s wine and still stocks the beverage, revealed to E! News that the $24.99 per bottle drink is still doing remarkably well.

“It’s been selling like hotcakes,” Navarro revealed. “We have had great success with it.”

Navarro also revealed that the pair “have been customers of ours for many years” and are quite the wine experts themselves “who love and enjoy fine wine.”

The couple recently bought 35-bedroom estate Château Miraval in France for $60 million, which boasts an adjoining vineyard in France. According to Us Weekly the sprawling land has a supply of grapes to make 150,000 bottles of wine. 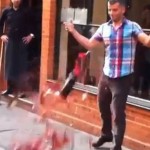