Anthony Bourdain knows a thing or two about a good drink. He’s eaten and imbibed his way around the world, taking hungry viewers with him, most recently on Parts Unknown. An obsession with craftsmanship led to Bourdain’s partnership with The Balvenie (a single-malt Scotch) and the American Craft Council. In addition to hosting The Balvenie’s web series Raw Craft, he also hosted the 2017 Rare Craft Fellowship Awards. We caught up with Bourdain to talk more about how, with a well-crafted spirit, less can be better, and why food trends aren’t actually all that bad.

So how does a man who has tried it all like his drinks? As it turns out, pretty simple. At home, Bourdain says he sticks to the occasional glass of Scotch, and keeps red wine and beer “kicking around” in case he hosts company.

Outside of his home, things stay similarly uncomplicated. He enjoys a good Scotch or Bourbon, served on its own. “Somebody went to a lot of trouble to make this stuff,” he says. He loves Burgundy wine for its unpredictability, calling its complexity almost “unknowable.” With beer, he’s less discerning: “My favorite beer is cold beer, served quickly with minimum fuss.“ 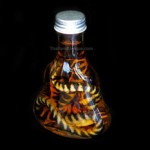