I don’t drink, but that doesn’t mean I can’t appreciate the subtle brilliance of MixStik, a mostly waterproof, digital swizzle stick that actually guides you through mixing complicated cocktails.

The $39 Kickstarter project is about 10 inches long, is covered in rubber and emits a series of colored lights. In other words, it looks like a toy, but it’s anything but. On display here at an IFA sideshow called DigitalFocus Global, the MixStik connects via Bluetooth to a drink-mixing app. 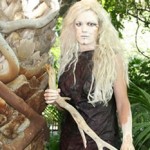 Ever heard of a dress made out of wine?