When you leave design school and look for work with your portfolio of fictitious student projects, half of your interviewers pause to tell you that, in the “real world,” you’ll never have the opportunity to design wine packaging. Much less, packaging themed after one of your favorite movies. Those folks never had the chance to work with Tim League and the team at Alamo Drafthouse Cinemas.

In looking at developing an identity for Alamo’s in-house branded wines, we quickly decided that it would be impossible to sum up everything that makes the Alamo unique in a single packaging system. Why not redesign the wine each year, based on a film that aligns with the brand? Alamo’s 2012 offering became two wines inspired by The Princess Bride, in honor of the 25th anniversary of the film.

As fans will recognize, “The Bottle Of Wits,” is derived from the iconic “battle of wits” scene when Westley first rescues Princess Buttercup from Vizzini and his henchmen. The custom wine line includes two varietals: “Inconceivable Cab” and “As You Wish White”. 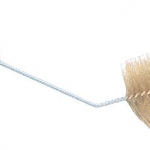