“Bubbles have consumed my life,” says Pieter Ferreira. It’s not an overstatement. Widely known as Mr Bubbles; Graham Beck’s cellar master has been on the bubble for 30 vintages. Coming in from the street, he shakes rain out of his hair. We sit down by the fireplace in a wine bar in Stellenbosch, with a glass of each of MCC, of course.

He’s just come from a Cap Classique think tank. As chairman of the Cap Classique Association and the driving force behind South Africa’s most famous bottle-fermented bubblies—if he’s not thinking about MCC, or making it, he’s drinking it.

There was a time though before this all-consuming obsession. Born in Durban the self-confessed ‘surfer dude’ loved science, so it was off to the University of Pretoria to study microbiology and plant sciences.

As the story goes he narrowly missed becoming a dentist when good friend and mentor Jan Boland Coetzee, organised an opportunity for him to work as an apprentice to Achim von Arnim of Clos Cabriere in Franschhoek.

It was his first winemaking gig, and naturally he was nervous. Jan reassured him by saying: “it’s not really what you know at first that matters, but it’s the experience of what you build up in your life.”

He spent seven years at von Arnim’s side during which they launched the Pierre Jourdan brand. During this time he also experienced a number of vintages in Champagne: at Mumm in 1987 and at Moët & Chandon in 1989. 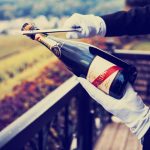 The History of Champagne Sabering