Katy Perry joined Madonna on stage on Tuesday night (27 October 2015) to toast her latest Rebel Heart World Tour concert with a shot from a banana bottle.

The Roar hit-maker surprised fans at the sold-out Forum in Los Angeles when she joined the Queen of Pop during her set closer Unapologetic Bitch along with Diplo and Anderson Cooper.

Firstly, Katy twerked against Madonna as the legend playfully slapped her butt and then performed a series of sl*t drop dance moves around her fellow music minx.

Katy, 31, couldn’t contain her excitement at getting the chance to gyrate with Madonna, 57, and grinned from ear-to-ear and giggled as she finished twerking before grabbing the microphone from her idol and jokingly shouting “I love you mom”. 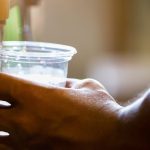 Can Drinking Lots Of Water Flush Out Covid-19?